Schweinebucht, bay of pigs or simply bahía de cochinos
Divers should stay more nights in the bay of pigs!

After a bad attempt to buy a ticket from Viazul to leave Habana to Playa Larga, we had to deal with the “greedy” colectivo drivers. The tickets for leaving Habana for the next day were all sold out and we had no other choice than hire a colectivo driver. After 35 minutes of bargaining we had to accept the offer of 25 CUC per person without pick up. After 3 hours of sleep, we were ready for leaving Habana and left our known casa perticulares to discover more from Cuba. Around 8:45 we arrived at the Viazul station and our agent was also there. I think he had to protect us like goods from other drivers, maybe we would have found a better deal, you never know. Anyway, after a while our agent could find a taxi that picked us up and finally we were on the road.
But wait there was at first a better attempt, a small Suzuki picked us up and the driver asked us where in Santa Clara we want to go. So our response: Playa Larga not Santa Clara. The Suzuki came to a full halt and the driver was swearing to our agent and we could leave our “taxi”.

The “real” colectivo was a big jeep with 8 tourists inside and everybody paid 25 CUC. A commission for the agent some CUC for petrol. I think they make good business, which also a hard working Cuban confirmed me. People working for the tourist or with the tourist are from the upper class.

We were happy when we saw the sign of leaving Habana, the happiness did not last long. Due to a stop at the workshop our journey was more delayed. No worries it is normal in Cuba. Enjoy the moment.
Finally we have made some progress and after a small break at Jagüey Grande we enter Playa Larga, where we got off the colectivo.

Right next to the big crab statue in the centre the tourist information waited for us. The lady there was so nice and helpful and explained us everything. Even could she recommend a casa perticulares nearby, which we booked and not a single penny did we regret our decision. The name was: Hostal Caribé Kairos 2 minutes from the local shop.

After a small break we went on our first adventure: the crocodile farm. Taxi from the centre to the farm would have cost around 20 CUC. We decided to do the Cuban way –> colectivo. After spending some minutes for waiting and 2 CUC spent we arrived at the farm (5 CUC). The crocodile were awesome there were even other animals but after 1h – 2h you have seen it all. With a bottle of rum and thirst for adventure we began looking for a colectivo. After many failed attempt and a bus driver that wanted to rip us off, we finally found a lovely family who gave a lift back to Playa Larga (2 CUC). 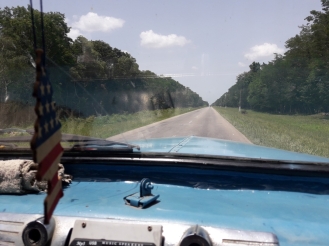 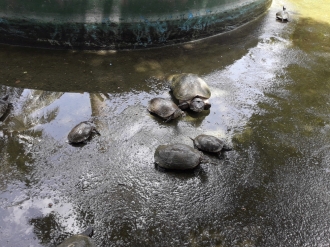 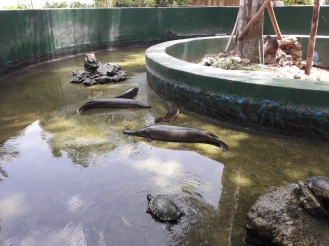 Some Wi-Fi, good Rum and the heat made us very hungry. A big big big dinner waited for us! Rice, breaded chicken, mashed potato, vegetable soup and for dessert pomelo.

Full with food and delicious Cuban tastes we headed to the nearby carnival. Fancy self-made attraction could have been seen in action. Also some “tattoo” sprayers were doing their jobs for children, which we for sure also tried. The fancy attraction was 5 MN and the tattoo 2 CUC.

Diving, Diving, Diving
On Saturday we booked a diving tour. But before it started we woke up to a fabulous breakfast. At 8:00 am the bus picked us up at the crab statue and we headed to the diving centre. Geared up, we were on the way to the first diving spot. Three dive groups were made: zero dives, open water and advanced. Alex with zero dives had a small introduction and also had some tasks to do in and underwater. I went with the open water group and enjoyed the dive to the fullest. The advance group went to another spot where they could dive through tunnels and small caves, awesome, maybe next time J. We booked this tour at the tourist centre, Alex paid 25 CUC + 10 CUC (introduction), I paid 25 CUC for one dive. You could also dive a second time for additional 25 CUC but they told me snorkelling is way better at the second spot, so I did snorkelling. The second spot was a breath-taking beach also nearby was a 70 m deep cenote. Around 15:00 we were back at Playa Larga where we met Sanchez (colectivo agent). We booked a colectivo for 10 CUC to Cienfuegos next day.

Saturday we discovered the surrounding of our casa perticulares. A small visit to the bar nearby and an awesome time with the casa family at the carnival filled Saturday night. The stars and the milky way were awesome that night. Walk a little bit north outside of Playa Larga to see them clearer. Do not forget to visit the crab and the tank. 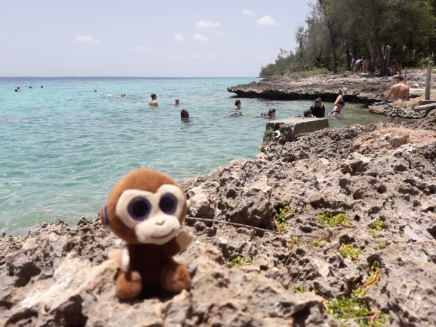 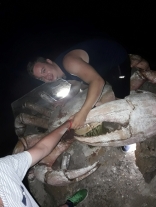 The stay in Playa Larga was awesome, I think the lovely and warm family in our chosen casa perticulares made the visit 3 times better. Food, bed, services and conversations were fabulous. You could feel that the family loved and liked the job of hosting tourists. Thank you very much for the good time!!!

THE BAY OF PIGS

What the Cubans call Playa Girón, the rest of the world has come to know as the Bay of Pigs, a disastrous attempt by the Kennedy administration to invade Cuba and overthrow Fidel Castro. Conceived in 1959 by the Eisenhower administration and headed up by deputy director of the CIA, Richard Bissell, the plan to initiate a program of covert action against the Castro regime was given official sanction on March 17, 1960. There was but one proviso: no US troops were to be used in combat. The CIA modelled its operation on the 1954 overthrow of the left-leaning government of Jacobo Arbenz in Guatemala. However, by the time President Kennedy was briefed on the proceedings in November 1960, the project had mushroomed into a full-scale invasion backed by a 1400-strong force of CIA-trained Cuban exiles and financed with a military budget of US$13 million.

Activated on April 15, 1961, the invasion was a disaster from start to finish. Intending to wipe out the Cuban Air Force on the ground, US planes painted in Cuban Air Force colours (and flown by Cuban exile pilots) missed most of their intended targets. Castro, who had been forewarned of the plans, had scrambled his air force the previous week. Hence, when the invaders landed at Playa Girón two days later, Cuban sea furies were able to promptly sink two of their supply ships and leave a force of 1400 men stranded on the beach. To add insult to injury, a countrywide Cuban rebellion that had been much touted by the CIA never materialized. Meanwhile a vacillating Kennedy told Bissell he would not provide the marooned exile soldiers with US air cover. Abandoned on the beaches, without supplies or military back-up, the invaders were doomed. There were 114 killed in skirmishes and a further 1189 captured. The prisoners were returned to the US a year later in return for US$53 million worth of food and medicine. The Bay of Pigs failed due to a multitude of factors. First, the CIA had overestimated the depth of Kennedy’s personal commitment and had made similarly inaccurate assumptions about the strength of the fragmented anti-Castro movement inside Cuba. Second, Kennedy himself, adamant all along that a low-key landing should be made, had chosen a site on an exposed strip of beach close to the Zapata swamps. Third, no one had given enough credit to the political and military know-how of Fidel Castro or to the extent to which the Cuban Intelligence Service had infiltrated the CIA’s supposedly covert operation. The consequences for the US were far-reaching. ‘Socialism or death!’ a defiant Castro proclaimed at a funeral service for seven Cuban ‘martyrs’ on April 16, 1961. The Revolution had swung irrevocably toward the Soviet Union. Lonely Planet, Cuba, 8th Edition, 2015, page 234.